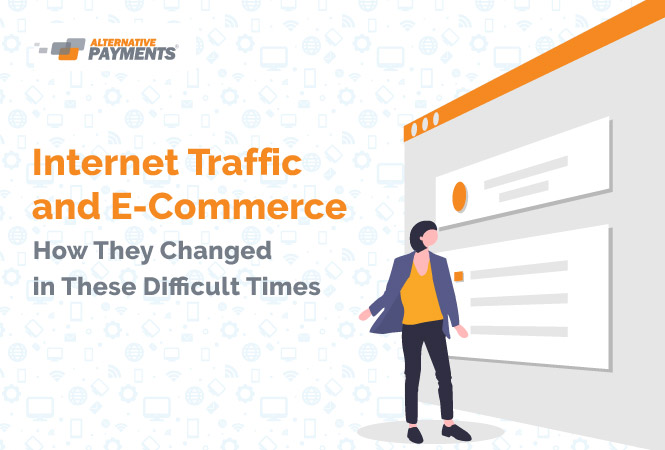 How Internet Traffic and E-Commerce Changed in These Challenging Times

It is not a secret that the world changes faster than before. Changes happen in the blink of an eye, not only changing attitudes and trends but also lives. 2020 has probably been one of the most challenging years that the world has faced since World War 2 – the outbreak of Coronavirus resulted in a terrible economy in many different parts of the globe. The virus, directly and indirectly, changed the lives of many, affecting all aspects of life. With the need to stay quarantined, many businesses found themselves at a loss, while others seem to have flourished ever since. This is so because internet traffic saw a significant rise of more than 25% in April, after only a month and a half after the pandemic started. According to Statista, the average page views jumped up to 28%. This is one of the main reasons why many tried to find and incorporate alternative payment options – to provide the new audience with the appropriate payment methods they prefer proved very useful. But what were the industries that benefited the most from the pandemic? What are the things that people searched for the most, or purchased online the most? And finally, are these seemingly unimportant things enough to create a new world order as far as internet traffic is concerned?

First and foremost, the thing that changed the most are definitely consumer trends. While quarantined, people searched for many different things online, most of which were entirely different from those they usually search for. More than half of the people around the world tried to make social distancing happen, which more and more people shopped online for the goods that they want to have delivered at their house. The industry that saw the biggest rise in internet traffic is Books and literature (according to SEMRush Sensor Data – an increase of 187%). It seems that people were finally finding time to read as they were not able to go out as often as before. The industry that saw the biggest rise of internet traffic behind books and literature is Hobbies and Leisure (119%), followed by the category of People and Society (106%). Shockingly, Health had a rise of approximately 96% and was fourth on the list. 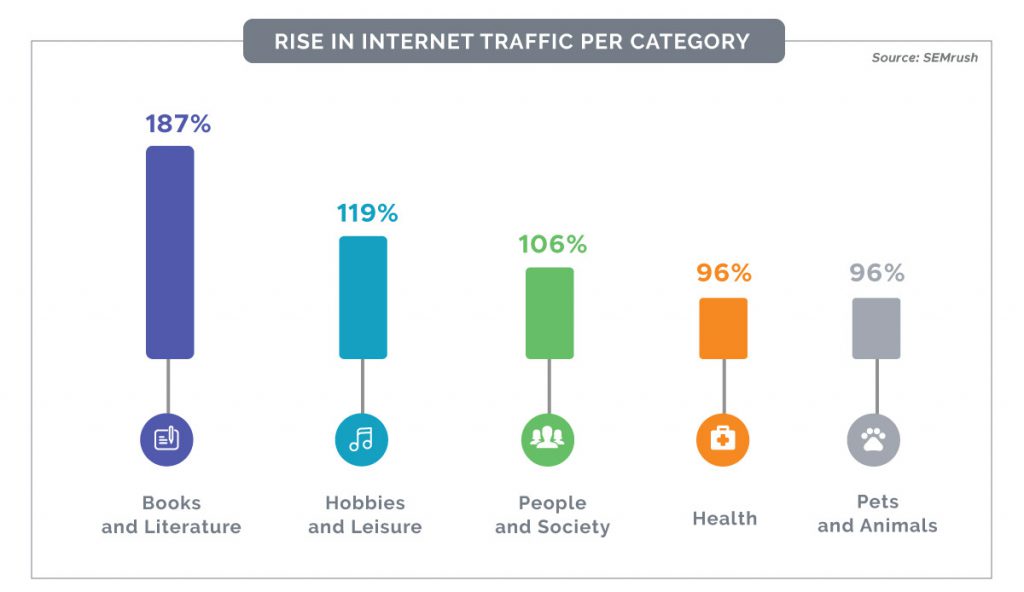 But how consumer trends change best shows the rise of internet traffic both per category, and goods as well. Without competition, people purchased toilet paper the most, which saw a skyrocketing increase of more than 14000%, followed by disposable gloves with a surge of 2300%. However, people were still buying all the same things as before, mainly because plenty of companies offered enormous discounts for online shopping. Websites such as Amazon, eBay, Walmart, and AliExpress all saw a significant rise in traffic. One of the things that enabled these websites to continue gaining traffic during the pandemic is that their customers could use alternative payment options such as SEPA, Sofort, or AliPay. This means that the pool of the people interested in their products and able to buy them was more considerable. Interestingly enough, the industry of Fashion, being among the most popular industries in general, is not among the ten industries that gained the most internet traffic during the pandemic.

It seems that we are open now as to what “digital transformation” means, even though we were rather doubtful about it. Being stuck at home during a challenging time is certainly not easy, but we, as a people, tried to make this as painless as possible. As social distancing became pretty important, people decided to still stay together, but online. This is the reason why video chat websites became extremely popular during this time. The video platform Zoom, which was used in professional instances as well, has reached more than 7 million users, followed by Google Classroom, which schooling systems all over the world used. On the other hand, platforms that have been around here for quite some time but not very popular, such as Google Duo, Nextdoor or Houseparty, benefited a lot from this situation.

But what is very important to notice is the difference in internet traffic between the website and the app version of specific websites. People mostly stayed at home, and were more encouraged to use popular platforms such as Facebook or Youtube on their home computers, rather than on their phones. According to the same New York Times article, Facebook’s website had a rise of 27%, while the app version only increased by 1%. YouTube website’s traffic, on the other hand, increased by 15%, while its app version saw a slight drop of almost 5%. 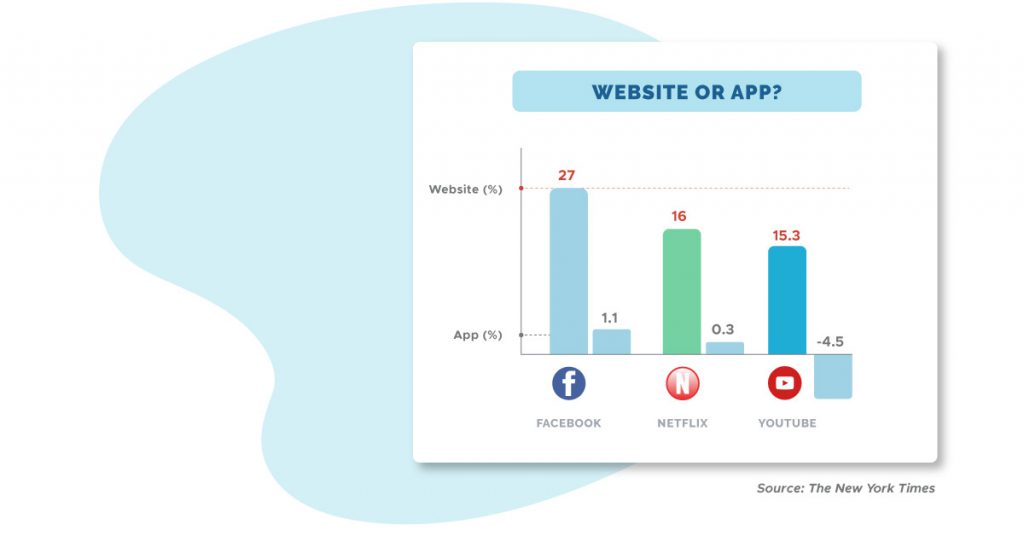 How is COVID-19 affecting traffic and E-commerce?

The world of E-commerce is yet another item on the list that will somewhat change in the future. E-commerce depends significantly on the amount of internet traffic, so, naturally, it is changing as people are sitting more at home. A survey conducted by Business Insider Intelligence states that many people will still rather purchase something online than in store. The survey also says that people older than 60 will avoid going to the store or the mall the most. The situation with the younger generation is very similar, even though they are more likely to go out of the house and shop in shops.

But every company that is somewhat involved in global trade feels the impact of these challenging times. That is why plenty of businesses are making their online presence even more robust and turning their focus on e-commerce rather than selling in actual shops. However, what many fail to realize here is that having a web page is not the only thing important for E-commerce businesses. Reliable web stores will give each customer the possibility of buying their products, no matter where they are in the world. This is also why many incorporate alternative payment options, based on the industry of the business and the country or area that they want to target.

B2B e-commerce businesses have also experienced different changes and the effects of the virus.  Apart from the fact that more than 65% of salespeople have lost deals due to the pandemic, the second biggest problems were customers who were postponing their decisions of purchasing a specific product. 50% of shoppers were not entirely sure that they wanted a product that they have ordered, thus affecting businesses all around the world. Another issue was that salespeople were not able to meet customers in person, which plays a significant role in the world of trade.

But there is always a silver lining, and B2B businesses can certainly do things that would make them stand out in the crowd and fight a bit more in this challenging time. Being completely aware of the power of the website as a platform, giving all customers equal options, being completely safe and preventing order errors are just some of the things that can help. Following customer trends and making sure everything is punctual is the recipe for e-commerce B2B success.

We can never correctly predict the future, but we can guess in what direction the world is going. As far as B2B business is concerned, it is almost safe to say that it will indeed play a bigger role in the future. A theory states that there are three different scenarios: one which will make all domestic supply chains more popular, thus focusing less on brands and supplies from abroad. The second states that the customers’ appetites will be cut down, introducing a spending limit. The final scenario calls for an omnichannel B2B E-commerce with the option of popularizing E-commerce businesses that understand mobile and financial technology, payment options, cost-effective home delivery, etc. This means that in the following months, and perhaps even years, we will continue to see a rise in traffic, especially for online-based. This is a call to action for all entrepreneurs to focus their business online as well, find the best alternative payment options as it will undoubtedly bring more customers to the game. More than 50% of people still shop products online (apart from groceries and medication), and they will continue to do so, at least for the time being.

To sum up, it is perfectly safe to say that the way we used the internet changed a lot. We have certainly used it for leisure and fun, but we have also used it for serious things such as researching, reading, and purchasing online. While some big brands lost customers, others acquired them; while some websites lost in popularity, others became extremely popular. The internet is a peculiar area, and it does continuously change. Challenging times as these make these changes quicker, and that’s why we need to do everything that we can to attract more and more traffic for our business. Take a look at the alternative payment options that we provide so that you could gain not only more traffic, but also more customers. This is the time to give everyone the same chances of buying, regardless of where in the world they are.